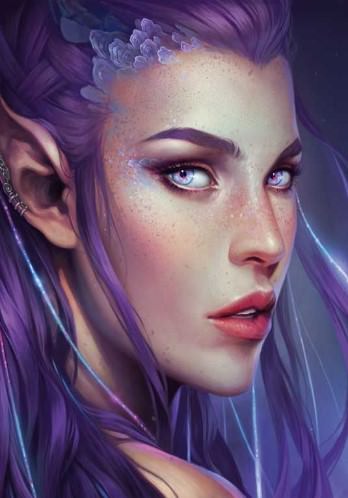 Appearance
Thrania is an elf with porcelain skin, blue and purple hair and green eyes. Thrania is not as delicate as her kin with a toned slender figure. It is clear she has more strength and constitution then the average elf.

Personality Profile
Thrania is disciplined, dedicated and often overly formal. Rarely does she relax and act more like her free loving kin, typically only in the company of people she trusts once duty is done. Thrania is often kind and compassionate restoring to violence only when others are at risk or an order is to be carried out. She believes in racial equality between the goodly races and a healthy respect for the land that provides for them.

Background
Thrania, Her mother Sinnafain Ju'eine and her father Elnaril Ju'eine lived in the city of Silverymoon after her grand parents died in The Weeping War. Both of Thrania's parents had been part of the Knights in Silver although not as lawful as their daughter would one day become, both believed in protecting the innocent and their home. Growing up in Silverymoon gave Thrania a unique view of the different races. Barely noticing the racial prejudice that existed mainly outside of its walls. While also limiting her understanding and knowledge of traditional elvish communities.

The city was not the only thing to shape Thrania. Before the elf had turned sixty her parents where killed by a necromancer, who had been posing as a member of the Spellguard while on patrol outside the city. This resulted in Thrania being raised at a local orphanage within the city by various humans, half Elves and Elven care takers.

In Thrania's eighty eighth year she met the man who would become her greatest role model, Laderin a human Paladin of Lathander from Rhyester Matins. Laderin had a great love of nature and spring born from his faith. And would often take the orphans out to garden and play sword fight when ever he had the time. Laderin took special interest in the elf due to her affinity for nature and her ability with a sword, It did not take long for Thrania to become attached to Laderin, his noble and kind baring reminding her of her mother and father. After a few years the pair had become close, Thrania seeing Laderin as a father figure and in turn he saw her as a daughter, With Thrania's blessing Laderin would end up adopting Thrania five years after they first met.

At the age of a hundred and twenty Thrania followed in her parents footsteps and join the Knights of Silver. Bringing great pride to her adoptive father Laderin who had made a great achievement as a paladin, by living to over sixty years of age. Thrania put the ranger skills her parents had taught her and the paladin skills Laderin had taught her to great use in the Knights of Silver. Thrania was a dedicated and loyal member of the Knights of Silver for over twenty years earning the respect of her brothers and sisters in arms, until one day Thrania awoke to find Laderin had passed in his sleep old age having taken him. With his passing Thrania was devastated and decided she needed to travel the city becoming marred by death in her eyes. She would set out to spread the word of her faith and use all she had learned to aid those in need as Laderin would have done. With her new decision made she resigned from the Knights of Silver with a promise to one day return, and made out for the sword coast who's war with the undead in years past had become well known.