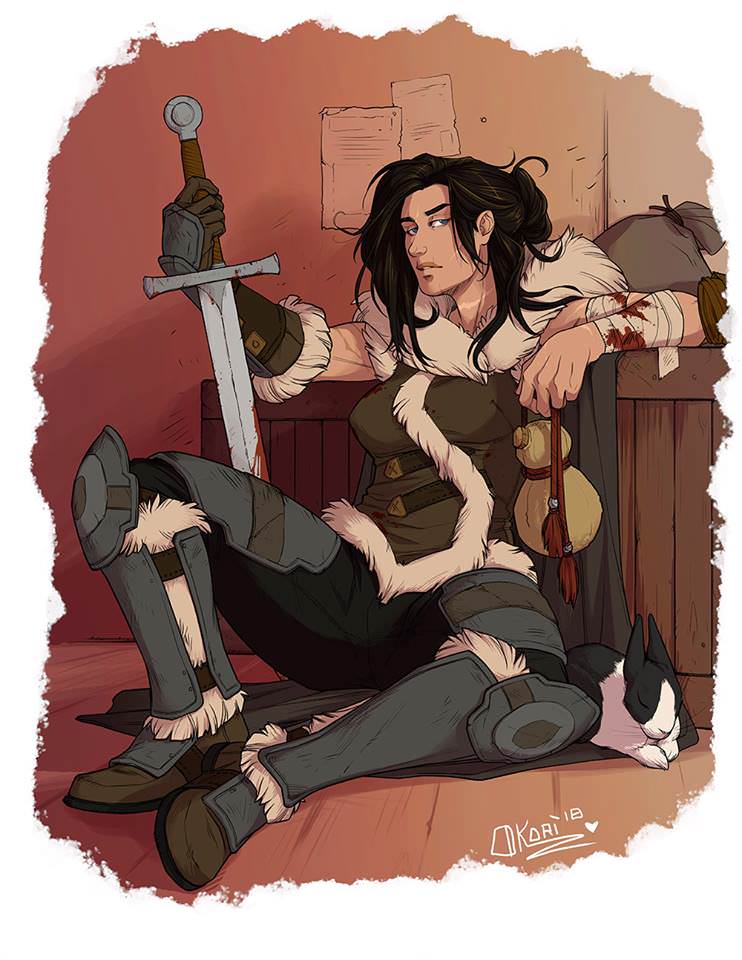 Appearance
A powerfully built woman of northern origins, Aesa is nothing short of the peak of human athleticism. Tall and long limbed, with wiry muscles lining the whole of her body, she retains a full diet and rigorous physical activity to maintain what she has accrued in her years of adventuring. Nary a handspan can be passed on her skin without finding the marks of some battle, long passed or recent, it tells the tale of a warrior who is reckless beyond reason, or apathetic to her own continued existence.

Her face is strongly framed, with a narrow jawline underscoring thick brows over sleepy blue eyes. Raven black hair twists back across her scalp into a partially formed bun, stray locks falling forward across her face and over her ears as careless of her frumpy appearance as it seems to naturally work for her. She never wears face paints of any sort, and she keeps her nails trimmed short under the constant duress of gauntlets and leather glove alike. And like most of her body, her face has numerous marks, including one along her neck more curiously burnt looking then clean cut.

Her gear is much better cared for then herself; her bags regularly replaced when they become worn, and her armor oiled and free of rust; marked with arcane runes that she once feared and reviled. Around her shoulders she often wears brown or green cloaks, sometimes more weather worn but always lining her shoulders is a shawl of beige fur.

Personality
Aesa is honest, forthright and direct with most people she interacts with. She treats others with respect and courtesy up to a point where she feels she's being looked down upon or mistreated, where she becomes cynical and jaded. She has an appreciation for spoken language and a growing admiration for poetry spoken by some of her distant associates. In recent months she's even taken to learning to read and write, having developed a sense of introspection and a desire to better herself. She still lives between worlds, being raised on the savage frontier of the north; but having come to appreciate the subtle beauty and art of the cities of the coast. She's become something of an enigma, not truly belonging anywhere, yet managing to get by wherever she goes.

Beliefs
Once a staunch follower of Uthgar, her years along the Dragon Coast waned the conviction she held in her parental god. She grew from being a woman of the wilds to somewhere in between, now living between the natural and civilized world with some difficulties. In light of this change she turned her faith to a goddess that embodied her newfound respect for southern cities and their peoples, as well as her love of the natural world and spirits. Thus she became a follower of Mielikki, though her relationship with the goddess could be more readily described as one of hope and admiration rather then the obedience and deference she felt toward Uthgar.

With the coming of a new companion of the spirit Aesa has also a growing, fond view of the god Nobanion. His nobility and righteousness standing as something of an inspiration to her, different from what she feels for the likes of the Triad in that it is still primal and wild.

Background
Born amidst the tribes of the Uthgardt, Aesa was raised as a shaman. In her teenage years she befriended a spirit that won her over with its sense of humor, jovial nature and love for the living. The Spirit stoked Aesa's independence saying she ought to be more then an intermediary between the spirit world and the tribes; she ought to be a warrior, a war leader even. Drunk on the prospects of greatness, Aesa forgot her place in arguing this revelation to her tribe, to her family. To the spirit's delight she abandoned her tribe when they rejected it, and the spirit mocked and goaded her, declaring its victory over the tricked adolescent with cruel glee.

Aesa persevered, she didn't heed her training as a shaman further from that day forward. Instead she focused upon survival and travelling south to the lands of weak southern folk where she could live a life in safety, in spite of belonging to no tribe of her own. She passed Luskan and made her way instead to Neverwinter where she met and was trained by a man named Richard Ulleson; a retired knight looking to pass on his knowledge with the blade. He died of ailing health in his old age, leaving Aesa to depart further south where she has traveled since up and down the coast; from the seedy underbelly of Luskan to the sparkling towers of Amn. In recent years she has made her home along the sword coast as a wanderer who has taken to protecting those who need it.

Goals
Personal growth has become central in Aesa's life, but less in the way of swordsmanship and more toward adjusting to life in the south. She has taken to reading, studying chivalrous codes, ethics and philosophy in an attempt to break free from the staunch traditions that have clung to her in the years since leaving the Ravens of Uthgardt.

She also has sought out companionship among the Radiant Heart Auxiliary, following a path to become what she views as the ideal champion of southern folk, even if its members do not necessarily conform to said standard. Accepted as a squire, she sets herself toward rising through hard work, study and introspection.
Last edited by Kaybrie on Thu May 02, 2019 12:51 pm, edited 2 times in total.
Be the kind of community you want to foster.
Top

Destin
Hidden: show
'Seldom seen but often sought. He pulls me toward clarity while pushing me from affinity. Am I a friend of the poet, or a good deed for the knight?'
[/color]-
Long-standing companions, Aesa retains a distant but amicable working relationship with Destin. It could be easily said his hand played the greatest role in shifting her perspective from one of contempt for the south to accepting, then finally embracing it. Her decision to quit drinking was one encouraged by him, and to him, she made the promise.

Elias
Hidden: show
'Your spark deserved its chance to shine. I failed you, but I will carry your drive forward.'
-
A student of Candlekeep, Aesa took Elias under her wing at his unceasing insistence that she be the one to teach him how to fight before any other. While at first, she was outright abusive and callous toward the boy-wizard, as he continued to come before her to learn, endure and overcome, she warmed to him. While she was absent from the region he was killed under yet unknown circumstances, for this she blames herself for failing to give him the tools he needed to survive.

Nathan
Hidden: show
'Honesty so pure goes hand in hand with such naivety, hardship will not break you. But it may kill you.'
-
A relationship started in Candlekeep that has since grown; Aesa views Nathan as more of a friend than a companion or associate. She respects his desire to do right by others and take care of those who need it, thus she is ever prepared to aid him in whatever insanity he might be willing to stand against in the future.

Oona
Hidden: show
'Warm, delightful. A rare creature who sparks mirth and joy in spite of blood steeped in such evil. I needn't even suggest it, she rises above.'
-
A chance meeting came in Baldur's Gate, and Aesa has found herself drawn to Oona's shining charisma since. She knows the tiefling by her voice, her unique complexion, and her endearing personality. In the time that Aesa has come to try to better acquaint herself with navigating social circles and more limited foray's into the theater of love, she turns to Oona as her maestro.

Suul
Hidden: show
'I would give my pity, but you do not want it. I would extend my hand, but you will not take it. I do not know if it is pride or shame that binds you so.'
-
With Suul, Aesa can not be certain what is mutual or one-sided. She sees a woman with a tortured past, not uncommon along the coast, though one that is ever haunted by it. She recognizes Batzorigyn's desire for some measure of redemption however, from what she may never know.

The Thunderbird
Hidden: show
'I was naive to think you as selfless in the sense of acting for the betterment of others, rather you seem selfless in that you are no person. '
-
A'tun is a distant but repeat visitor in Aesa's life, and she has turned to him for spiritual advice and his sage counsel more than once. His relationship to the spirits and his queer ways seem familiar, almost nostalgic for the Uthgardt, and he earned her trust when he made her crisis in faith toward Uthgar about her finding her way, rather then him taking advantage of a lost warrior.

Since these events though, Aesa has remanded herself from him; his meddling in the death of a corrupt and twisted druid has since put Aesa on her heels, examining him more closely and warily as a man who acts as an instrument of nature can just as easily be a destructive hurricane as a gentle breeze.

Wren
Hidden: show
'A hardened woman of southern war, an expert and person to turn to for sobering guidance.'
-
Commander Di'corvi has little but respect from Aesa in a leadership sense. Her drive to serve the people of the coast and rise above a past fraught with shadowed deeds and associations resonates with the Uthgardt woman. Like with her closest friends, Aesa is not afraid to speak her mind to the half-elven commander, and the two have shared at least one bittersweet evening building comradery.

-To be expanded/detailed.
Be the kind of community you want to foster.
Top
Post Reply
2 posts • Page 1 of 1