A Nobody. Doing Nothing. Going Nowhere....

A Nobody. Doing Nothing. Going Nowhere.... 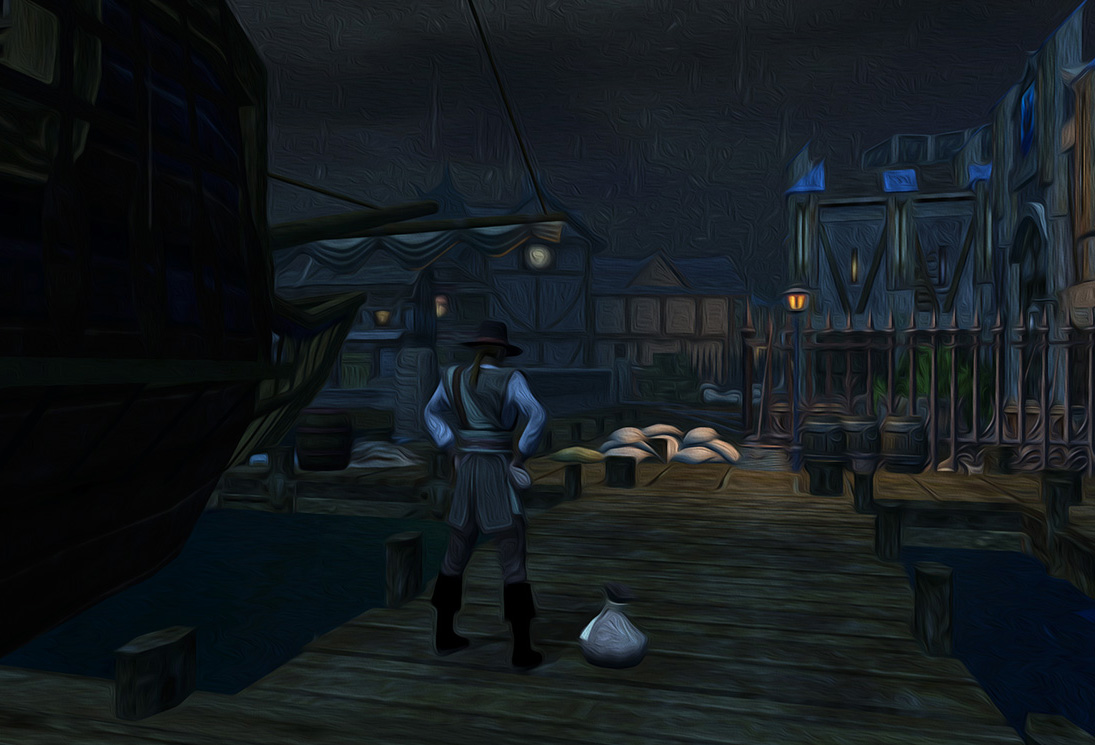 Congestion and questioning within the outer harbor delay the final docking of the ship originating from the Moonshae Isles—or somewhere near...—so that when finally moored, it is full into evening, in the known Sword Coast. Upon the wharf, the harbor edging the city of Baldur's Gate, a satchel is dropped, as two feet plant firmly down upon weathered dock planks.
Last edited by Steve on Sun Nov 10, 2019 2:20 pm, edited 2 times in total.
|> Jon Smythe — Chionthar Charter & Seaward Supply Co. — Seafarer, Knight of the Unicorn, Coast Way Adventurers Guild
|> Chezar Bloodeye — Mercenary-adventurer Half-Orc (Level 13, LFG)
Top 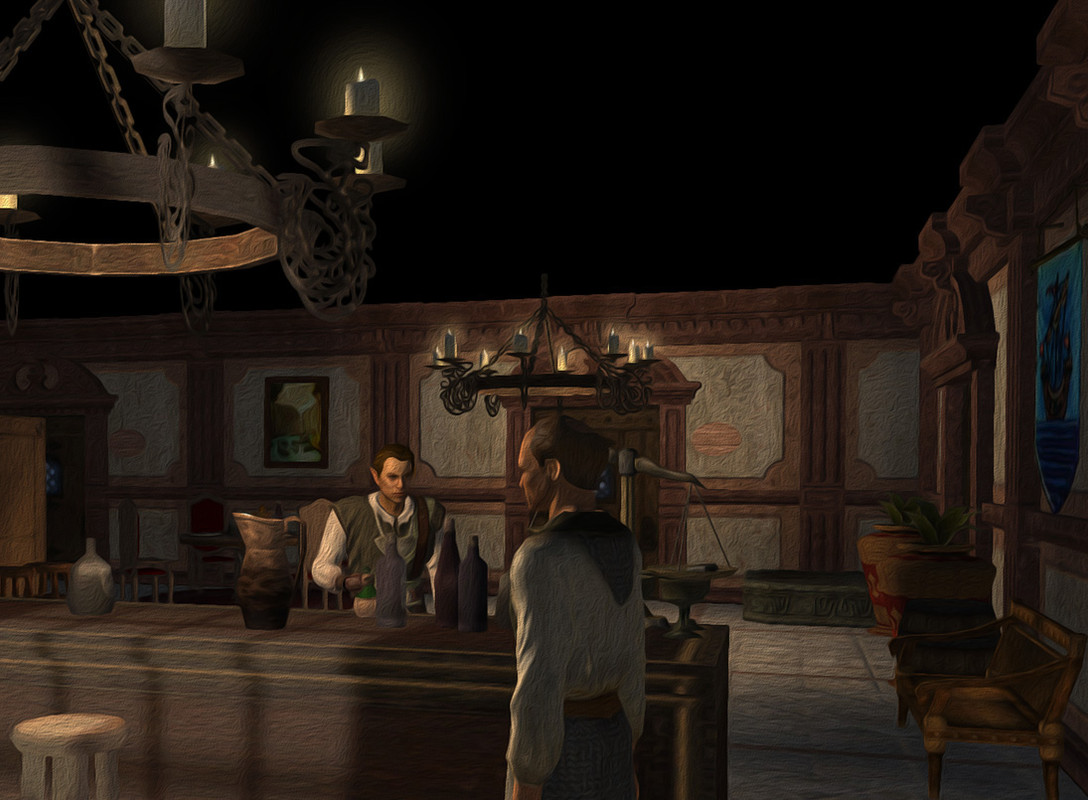 A room acquired for temporary stay in the Helm & Cloak. Certain appreciations for the finer import of wines brings Jon Smythe into company of both personal and patron, of the Feast Hall. News and rumors of recent events are both freely shared and skillfully acquired. Smythe keeps to discussing wine, attempting to not listen to much else. 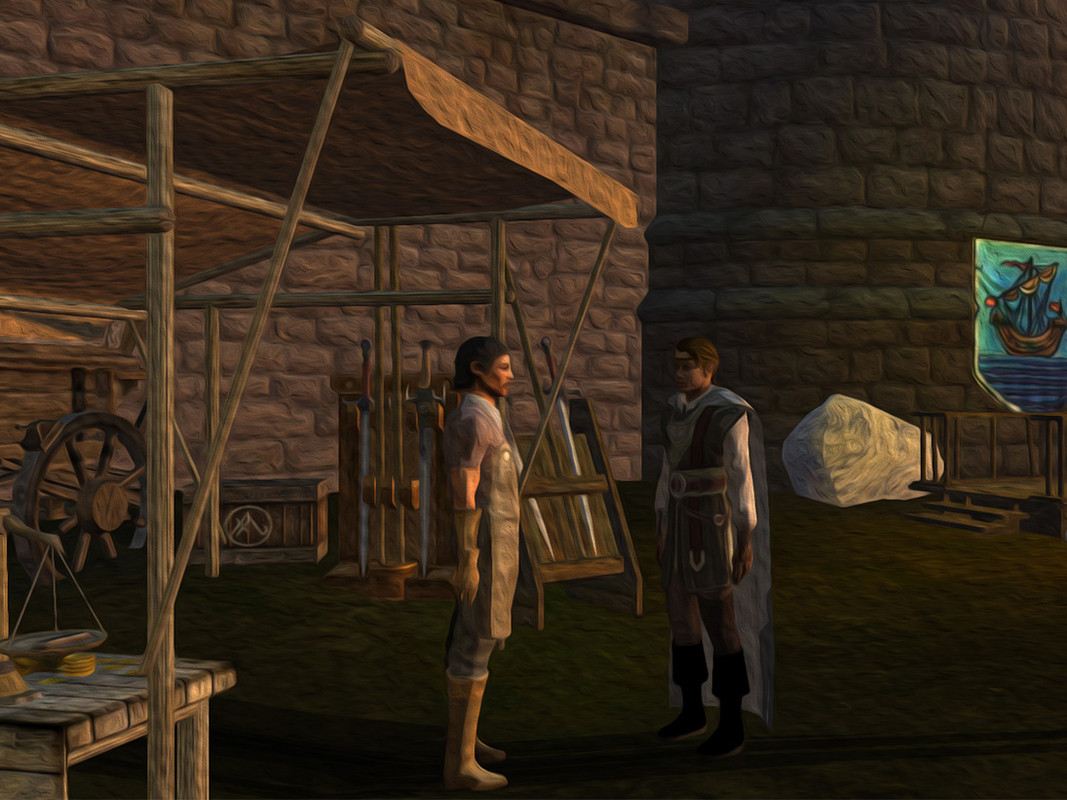 Some weeks ago...but not as long as before...perhaps more recent than one would imagine...

A stay in the Palace District would, without question, lead any person with a merchant's eye, to the Wide. It had been a few seasons since Smythe last spoke with Mudd, but it was apparent early on in the conversation that something had changed—the wares Mudd was consigning were of lesser make than Smythe had known. It was as if the paths of trade in this reliable wares stream had been diverted. 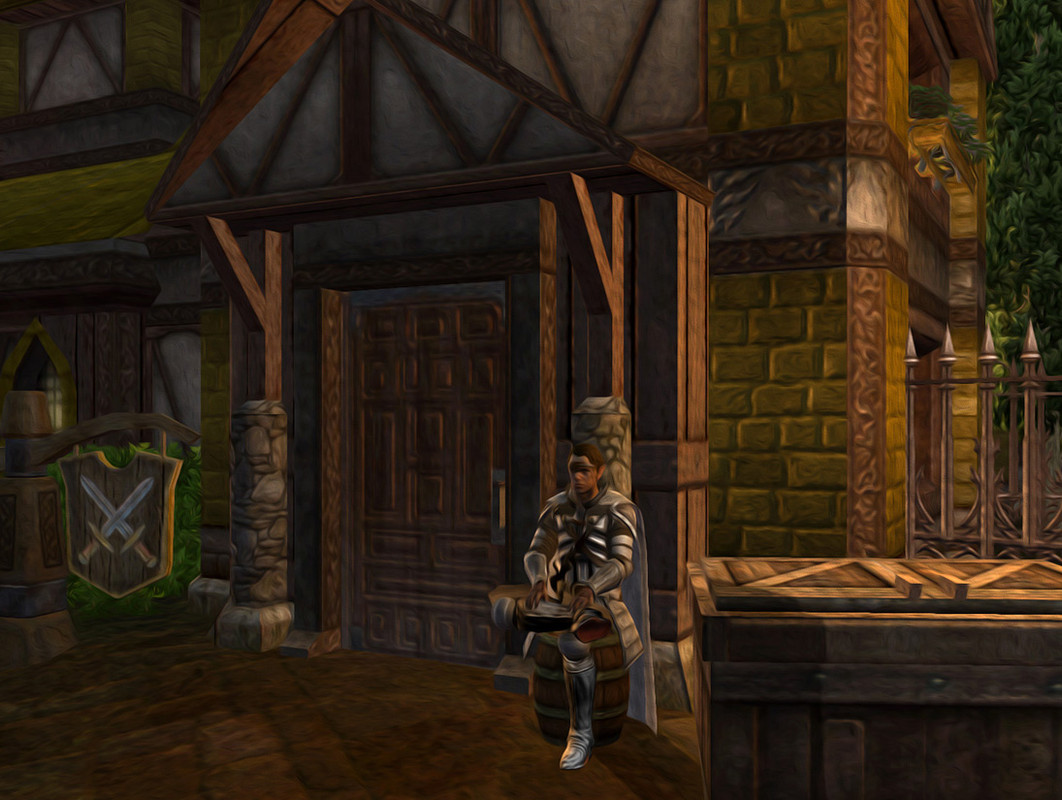 Some weeks ago...lasting, intermittently, until the present...

Conveniently but most likely unintentional, Maltz provided a barrel upon which Jon Smythe could rest, as he queried those he felt capable of possessing such wares has begun to offer for trade or sale. For what he says he does possess, could become the most prized possession, of another....
Last edited by Steve on Sun Nov 10, 2019 2:22 pm, edited 2 times in total.
|> Jon Smythe — Chionthar Charter & Seaward Supply Co. — Seafarer, Knight of the Unicorn, Coast Way Adventurers Guild
|> Chezar Bloodeye — Mercenary-adventurer Half-Orc (Level 13, LFG)
Top 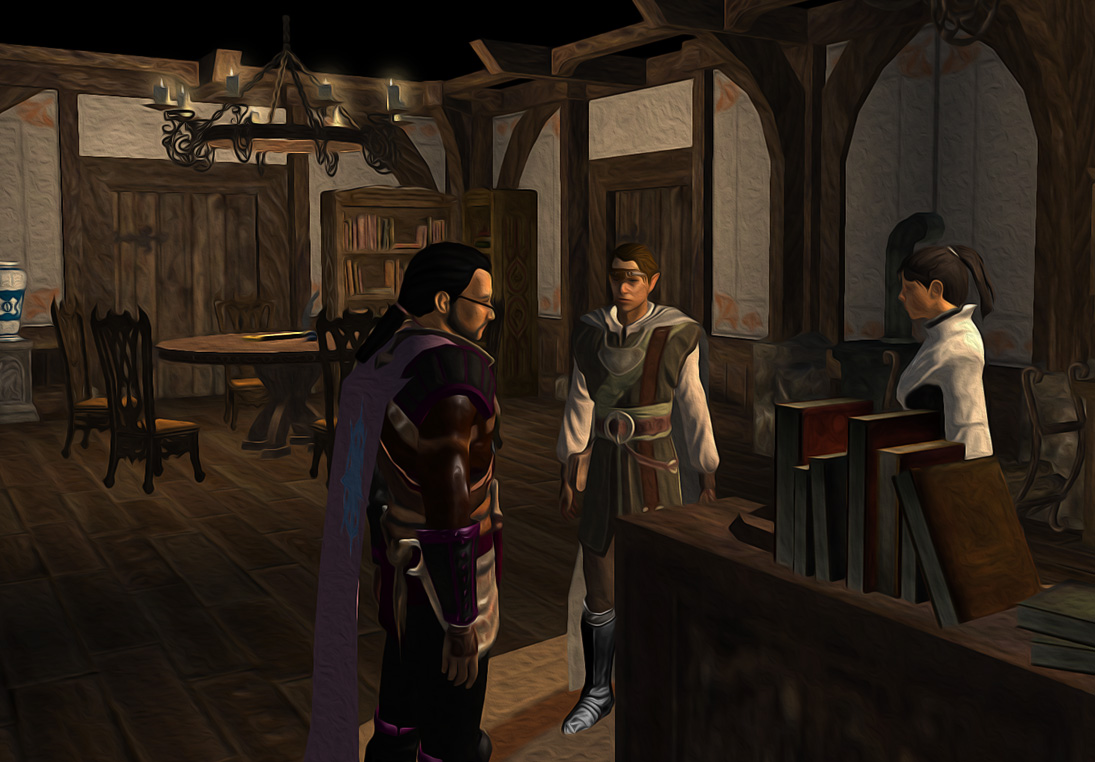 Smythe succumbs to old habits, and finds himself in discussion with a speckled non-adventurer mage promoting defense and quiet book filled rooms over...well, seemingly everything else. Smythe brings up the subject of oddities gained in other more non-passive pursuits, and the speckled mage claims curiosity and interest. A potential artifact in fragments of bone passes from Smythe to the mage self-introduced as Charraj Cain, in exchange for a bag of realmcoin. Though the speckled mage leaves soon with haste, Smythe makes nothing of it.
Last edited by Steve on Sun Nov 10, 2019 2:22 pm, edited 1 time in total.
|> Jon Smythe — Chionthar Charter & Seaward Supply Co. — Seafarer, Knight of the Unicorn, Coast Way Adventurers Guild
|> Chezar Bloodeye — Mercenary-adventurer Half-Orc (Level 13, LFG)
Top 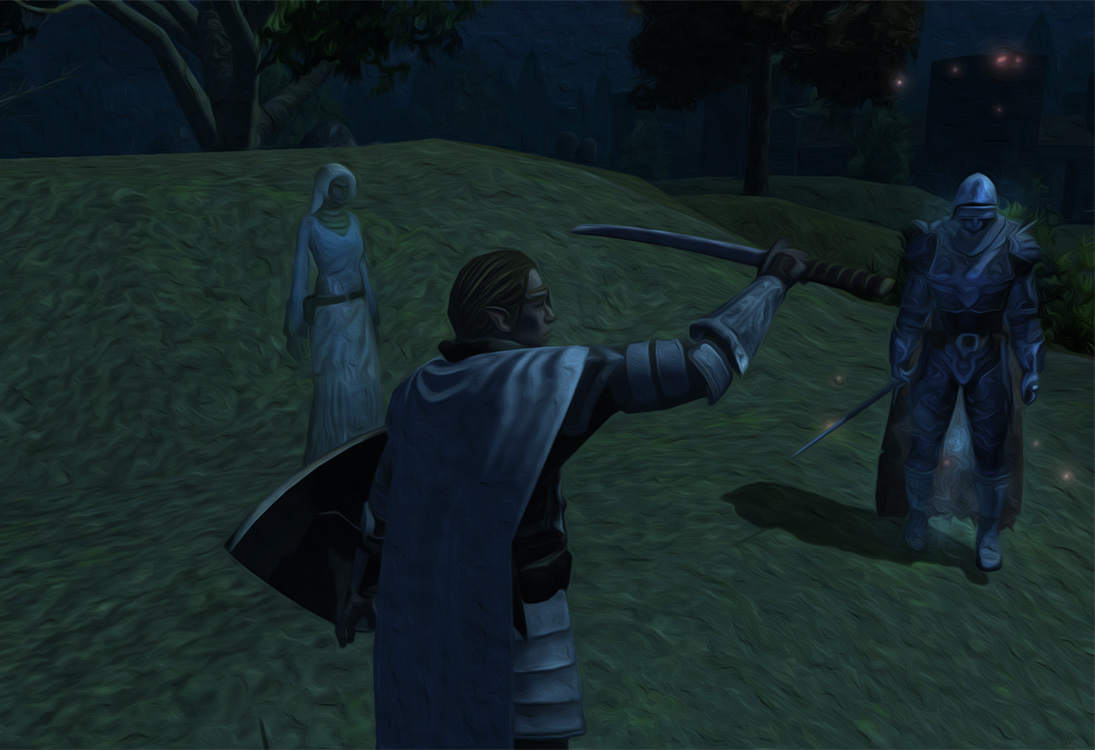 Within the High Hedge, Smythe is paired with a full metal mage and his shadowy elven maid, while traversing the rolling hills between Beregost and the Sea. Deep into the night, the fields would become battleground...but during a calmer moment, Smythe describes his successful swordsmanship from the point of the intelligent blademaster, he that mindfully wields a blade as an extension of self, his focus, sharp like biting wind upon naked flesh.

The armored mage shows steadfastness in conviction of his reliance on magicks to propel his tireless sword arm. 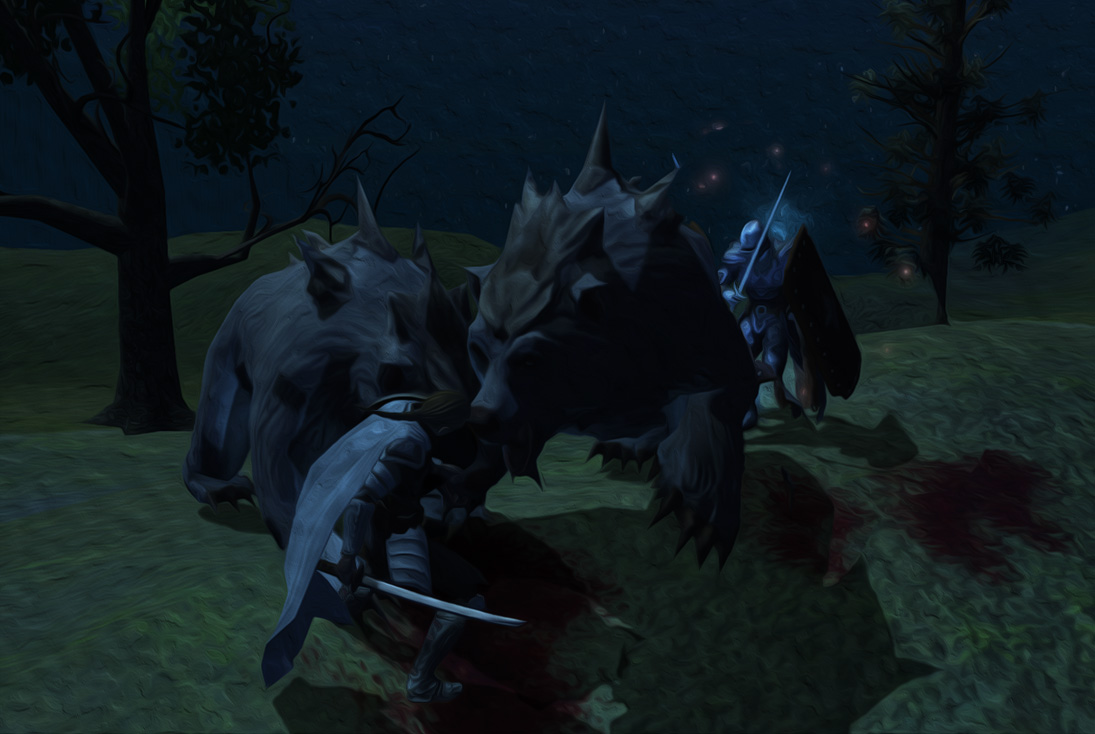 The dire bears of these rolling hills are relentless, like an army without end, numbers uncountable by the sane. It is a blood bath drenching the grassy knolls, the small curves curving the wet into pools, then small ponds. It is nothing to be proud of, so Smythe would later remark. 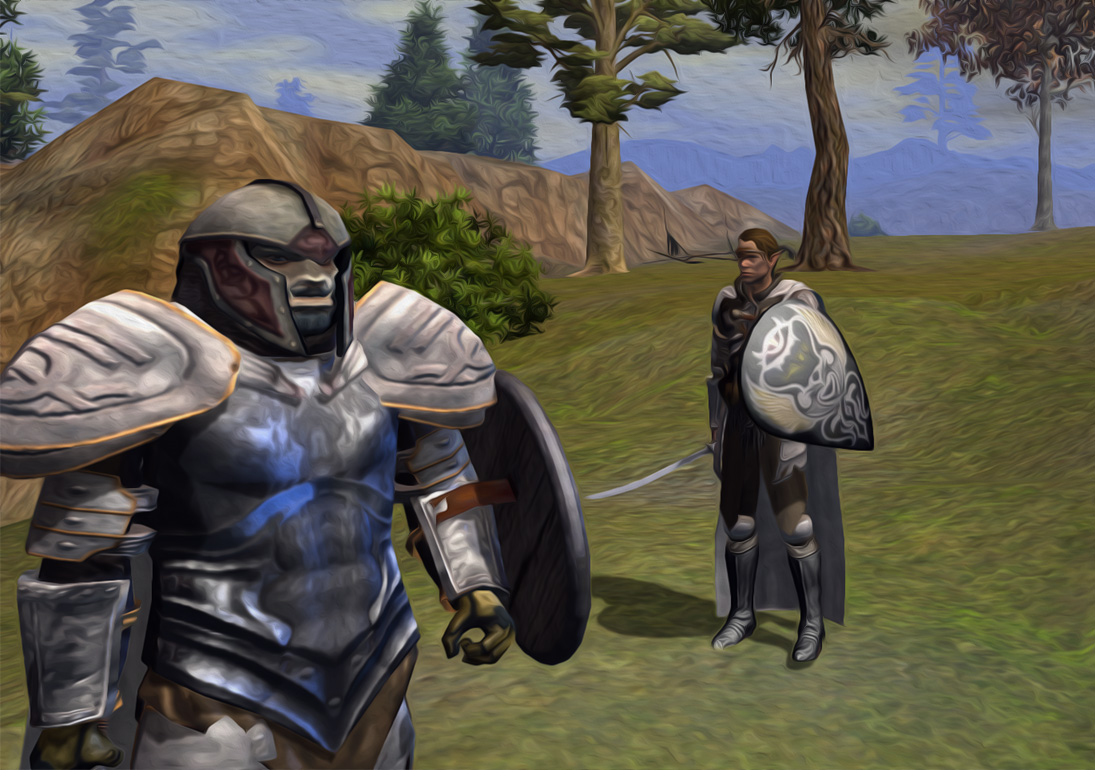 "You have a way with your weight..." Smythe exclaims as he noisily approaches the bulky warrior from behind, making every effort not to surprise the helmeted figure, who had just recently dispatched a dire bear in heavy handed fashion.

As the figure turns round to face Smythe, the half-elf reels back, halting his movement and pausing to take in the toothy maw, the brutish face—Smythe's eyes slit and his back foot digs deeper into the ground, rooting his body for any rapid engagement. "Where did you come from? Be you friend or foe? " asks forth Jon Smythe on the warrior of no-small-size.

"Me, from north I think it is" says the half-orc. Smythe looks north. "Aye, I reckon that be so. But what are you doing here?" asks Smythe.

Jon Smythe pauses, looking over the half-orc warrior with a calculating gaze.

"There is tastier meat farther south...if you like" says Smythe, in a tone structured to lure the armored muscle into a new direction. 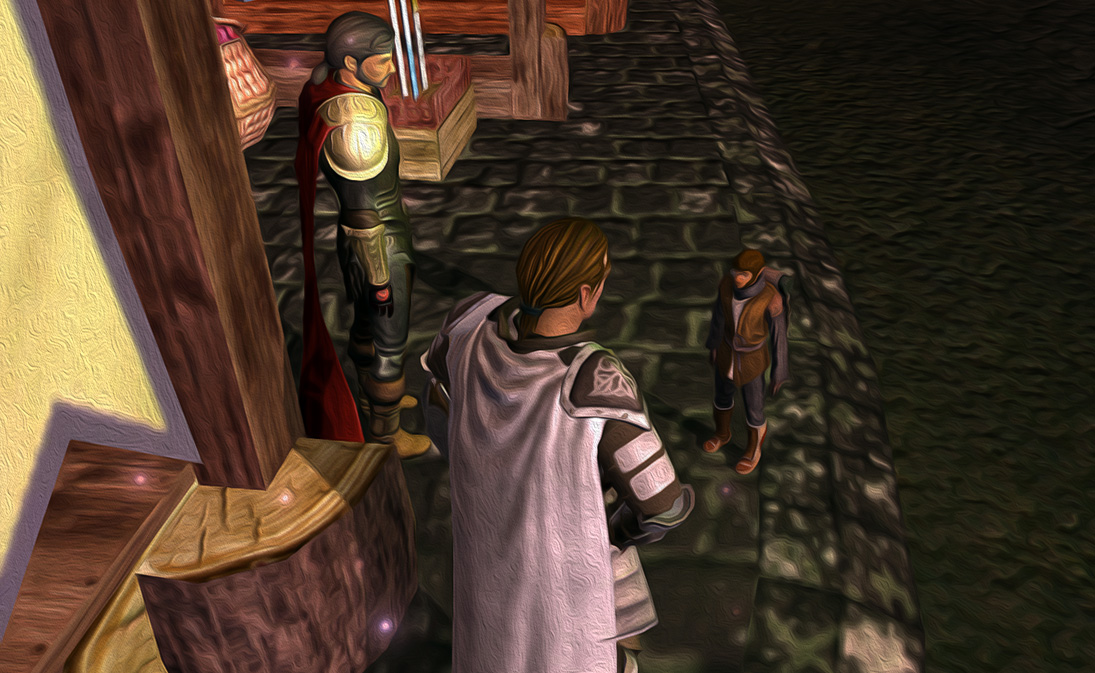 
Smythe peers over to the shorter person, arrived and eager to bargin. Smythe says: "Now then...have you brought the promised coin, for what I have to sell?"

The Halfling nods several times. "Yesy-yes, all the coin for all of the armor."

Smythe drops a large satchel at the halfling's feet, and opens a hand to receive the coin promised. "It has a great and defined value...and coin is my wish, thank you." The Halfling counts out several bags of coin, handing them across the cobblestones at their feet.

"I do hope the armor protects you well...it is the finest of it's kind!" says Smythe as the deal is completed.

The Halfling looks the armor over intently. "Marvelous! Nothing quite like Mithral."

"Aye...thank the Elves!" Smythe says, as he appears to absentmindedly touch his ear.

The Halfling looks up as Smythe does so. "Ooo . . you have Elven ears?"

"I do. Not by choice, but....they do me well." replies Smythe with a edging grin.

"Now...Blueberry pie I think..." the Halfing says as he licks his lips. "Fare thee well." Says Smythe as he gives the Halfling a final goodbye.

The Halfing waves a hand in return. "Goodbye to you...and your friend."

As the Halfing departs company, Smythe turns to his "friend" to say: "Well then...I felt much more comfortable than usual, knowing your shield was near my side. I thank you, friend..."

Smythe then appraises the items that are visible upon his companion, at times grinning, at times...frowning. Then, he speaks with sincerity: "Is there anything I can do in exchange for your service?"

In a day past, or possibly this day, maybe even hours ago...having left the Shelf of Many Books, Smythe heads back to the harbor and the Wanderess, moored there. He can be seen trying to engage both Calico Flint and Captain Deudermont. At times, his engagement seems to be a pleading with them...at others, showing them a hand with a gold coin in it. 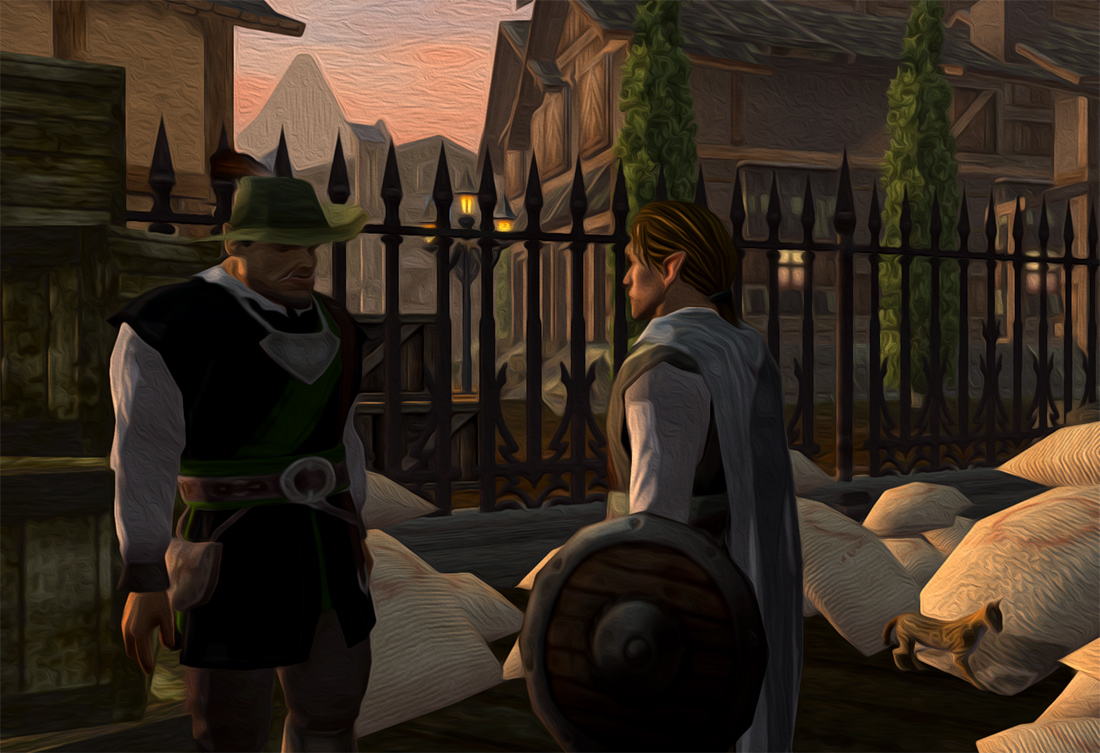 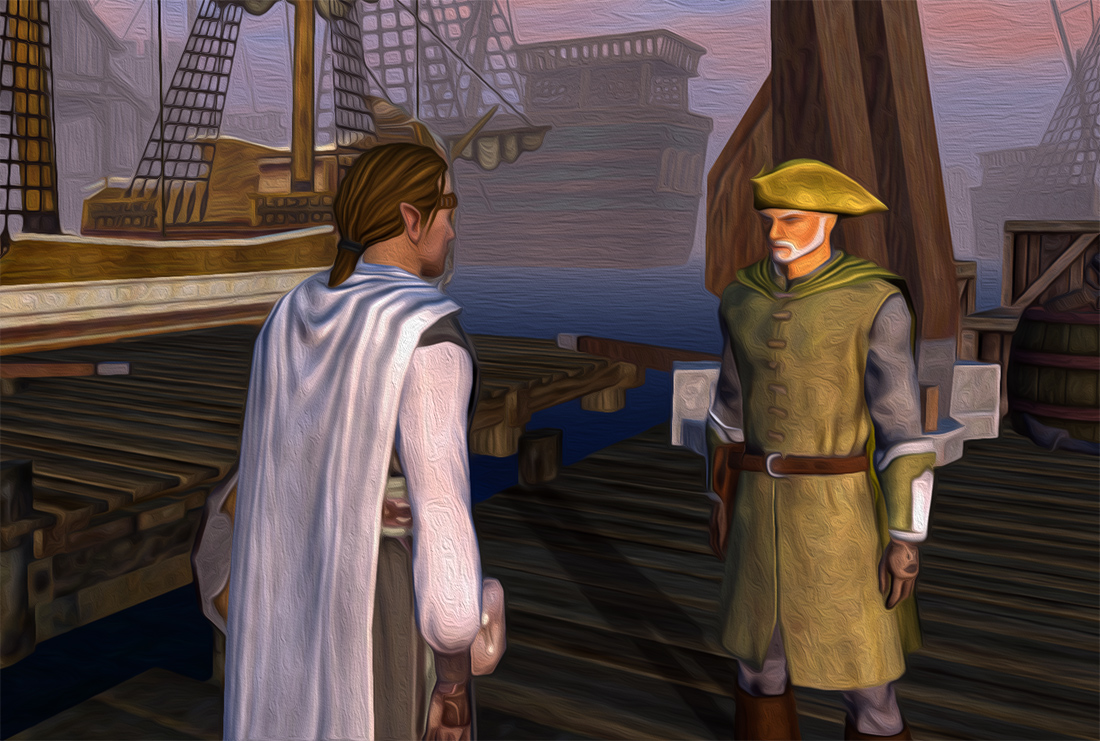 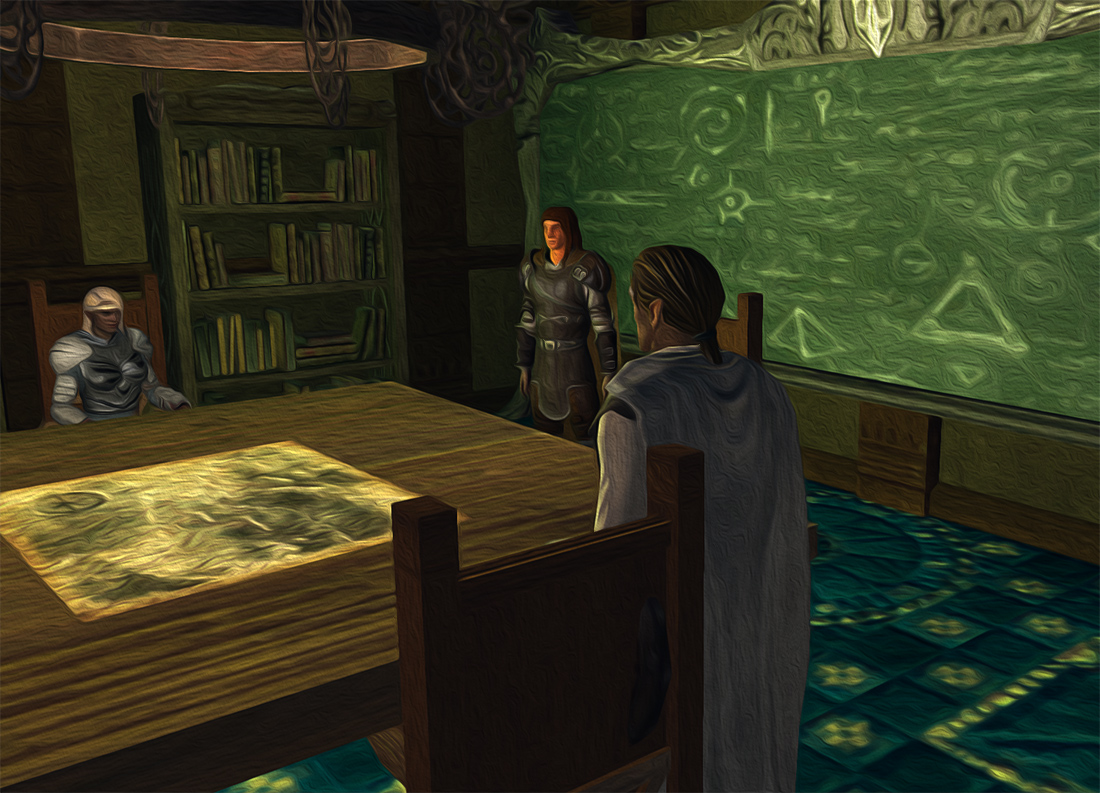 Very recently, Jon Smythe spoke his mind over strategy in War, with a couple of spirit to strike hard, at the evil that moves north, to cross the Chionthar, above the Sharp Tooth Woods. A detailed map of region, set up upon the grand table, is observed, manipulated, considered and arranged over and over...until the representative pieces that stand upon the map, satisfy the trio. 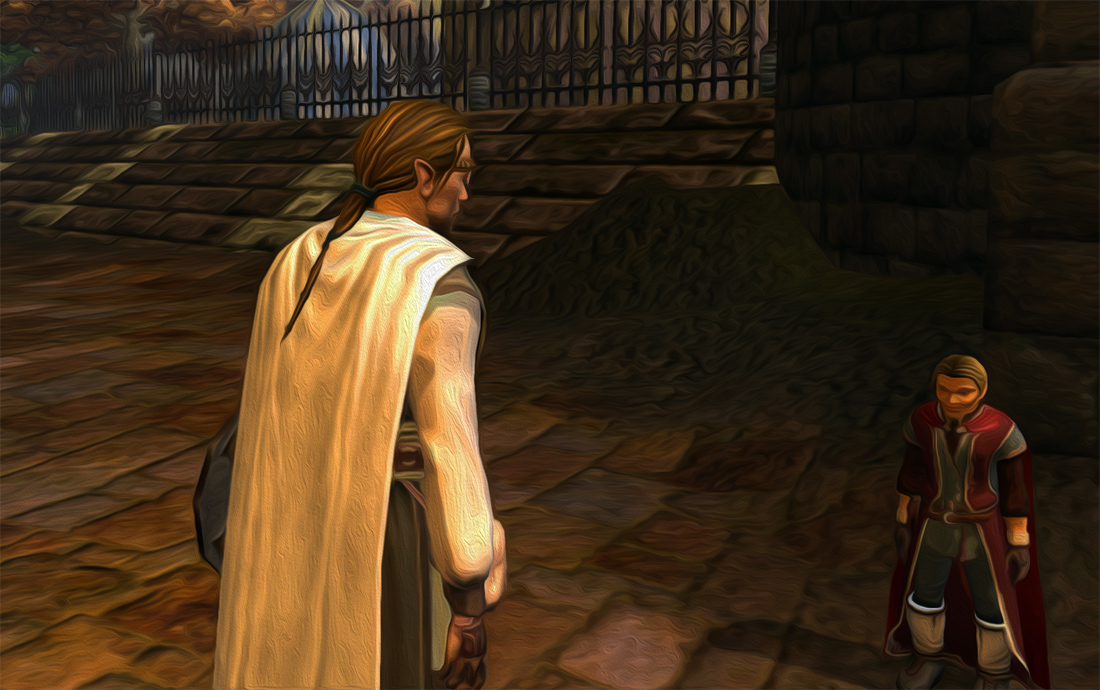 Smythe chances upon a smartly dressed gnome with a double pointy chin braided beard...and for once, this curious creature among all the finery and amazing wares on display and for sale in the Wide, stops him in his procession, such that he is forced to engage the being, simply, if not more, to learn his name. 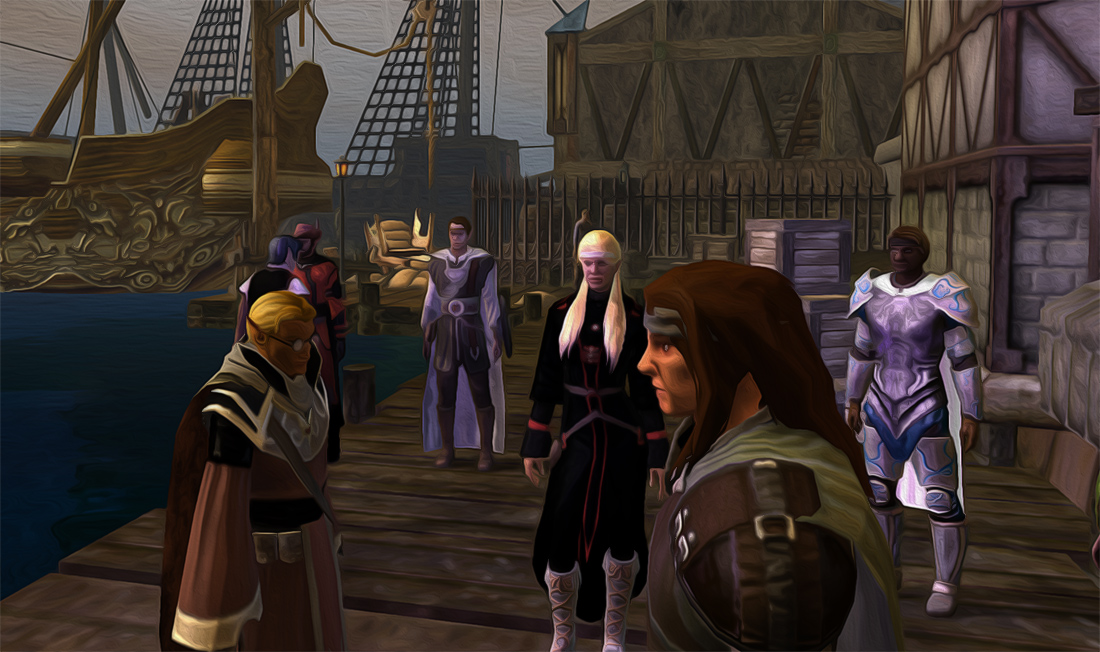 An impromptu gathering at the starboard of the Wanderess...where many seemed eager to embark on a mission—none could say heroic, nor foolish, in describing it. 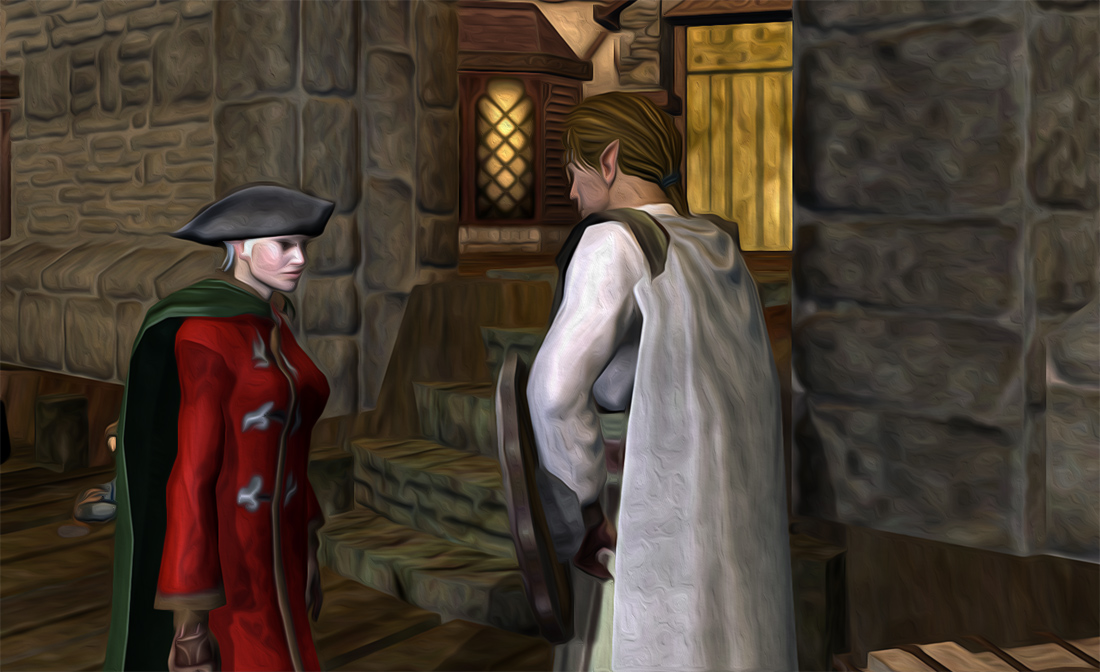 A half-elven female, demanding to be recognized as Smythe's Captain-by-Courtesy, goes to every length to persuade a completely, absolutely, in full resolve disbeliever in what-he-sees-before-his-very-eyes Smythe, that an "accident" has befallen them, and yet...Smythe must heed their orders. The swab—as Smythe refers to her—must prove their rank, from bottom up, if they wish to be Captain...

The female Half-Elven, in final attempt, pulls a Canary Diamond to push into the face of Smythe—a cracked Canary Diamond, so particular to Smythe...the very diamond that brought about his constitution weakening curse, that drove him from the Sword Coast so many months ago....

At the sight of it, Smythe takes a half-step backwards, his face showing pain...and his hand, quickly reaching to his scabbard—with every intent of drawing his sword.... 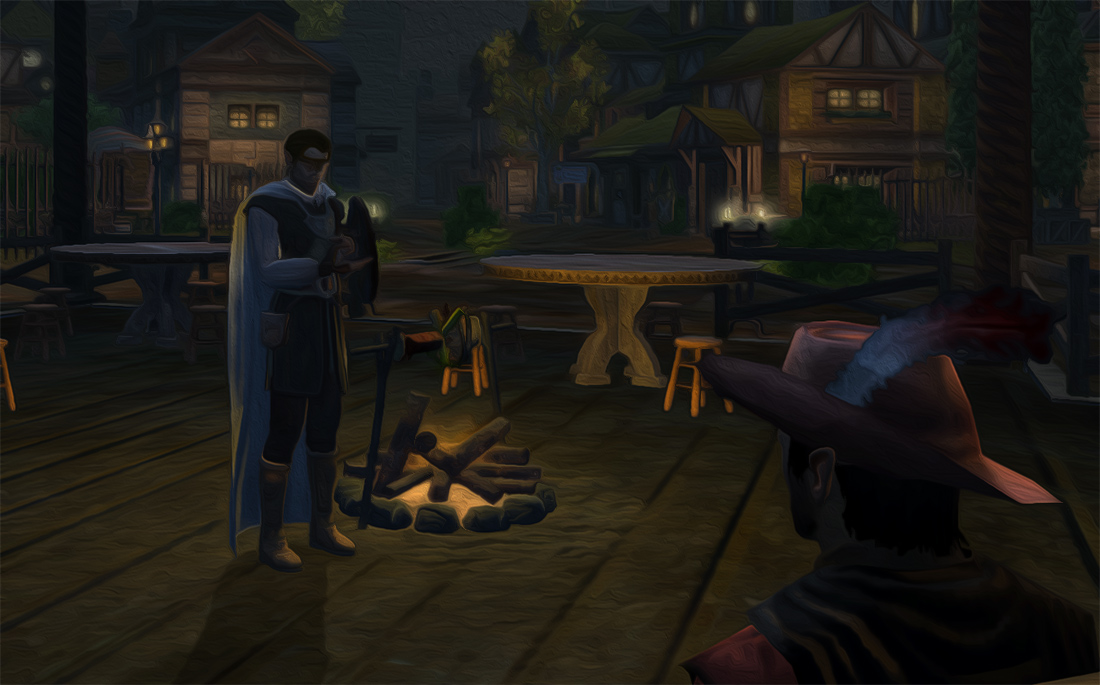 Smythe warms his hands by the roast at the Elfsong—it is nearly winter, the nights, brisk and full with a sea-born chill...or is it a chill that races from the east?!?

A familiar face—such that Smythe recognized it immediately—arrives to the patio, and engages him on matters both great and small...many times, a person by the name "CC" is mentioned...though that might mean little to anyone else currently dining under the stars.
Last edited by Steve on Sun Nov 10, 2019 2:28 pm, edited 1 time in total.
|> Jon Smythe — Chionthar Charter & Seaward Supply Co. — Seafarer, Knight of the Unicorn, Coast Way Adventurers Guild
|> Chezar Bloodeye — Mercenary-adventurer Half-Orc (Level 13, LFG)
Top 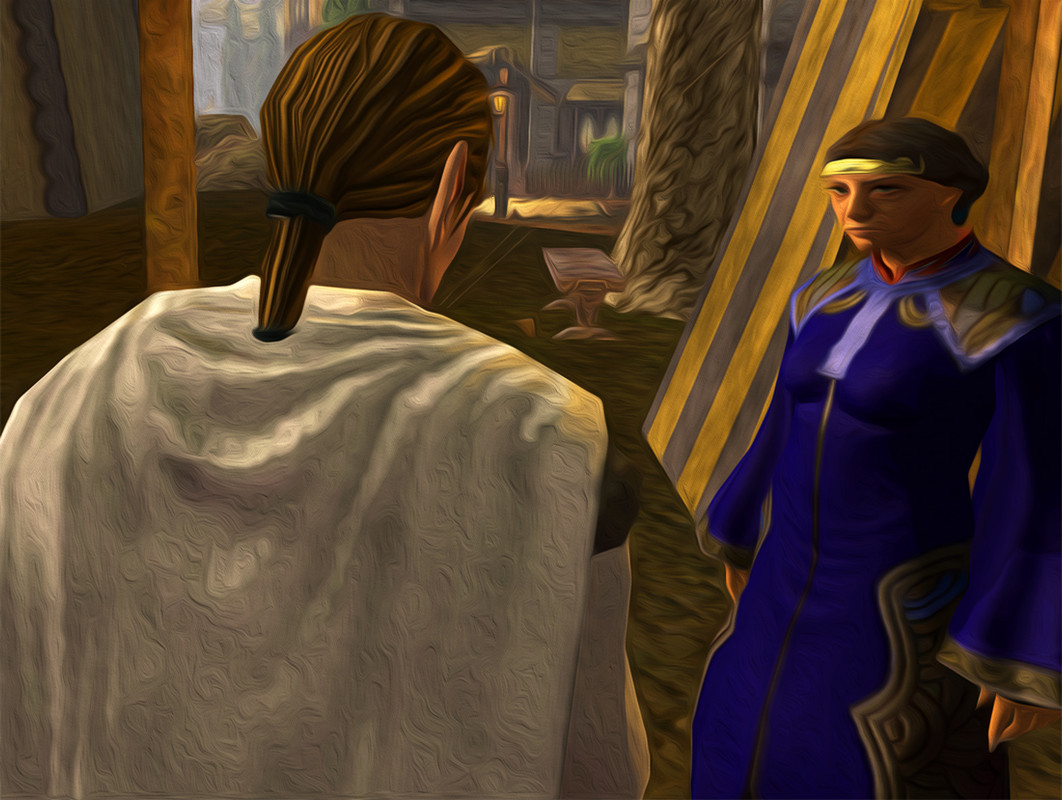 This day...hours before a meeting is to be had with many minds on the Plan....

The half-elf approaches the Mystic Margaretta, she who sits in the Wide, day in, day out, giving her insight...for what, be it coin, be it favors, be it as her power is direct from the Gods and none shall own it, freely...no one can say.

But Smythe approaches her, again—he has relied upon her divine insight before—in order to present to her, his vision, and ask, of her, what she herself, sees.

"I have perceived of The Blight, to be cursed, and a walking curse...but for the Undead, as well as the living. It seeks to cure, it does...but...what do you see of this creature, Mystic Margaretta? Is it the weapon, the lance we seek against the General...do you see it battling the Undead in the Fields from which they rise?!?"
Last edited by Steve on Sun Nov 10, 2019 2:30 pm, edited 1 time in total.
|> Jon Smythe — Chionthar Charter & Seaward Supply Co. — Seafarer, Knight of the Unicorn, Coast Way Adventurers Guild
|> Chezar Bloodeye — Mercenary-adventurer Half-Orc (Level 13, LFG)
Top
Post Reply
23 posts

Return to “Character Biographies and Journals”