Travelers and residents from all areas of the Sword Coast are reporting sightings of dragons. By all accounts, these normally rare (and extremely powerful) beings are gathering in numbers never before seen in the region.

Exclamations like "I'm telling you, it flew right over my house!" and "I woke up and found a, I jest you not, dragon making a meal of my prize heifer!" are becoming more and more common.

What exactly is going on, though? Most can only guess ...
Top

Numerous attacks have occurred up and down the Sword Coast. Chromatic dragons appear to be fighting metallic dragons, and the collateral damage of this "dragon war" is showing up everywhere.

In Beregost, the peace talks are tense, as the three armies warily watch the skies.

A few groups are coming to realize why the dragons are so active now, but that information is not widely public ... yet ...
Top

A plague at the Flaming Fist camp.

While the coast is a witness of dragon fights in the sky, and that everyone grows weary of it, the discussions in Beregost continues. The Flaming Fists, mostly stationed in their camp close to Beregost, grow weary of the situation and start to gather the supplies and equipement to head back north, to Baldur's Gate.

The next morning though, as most of the troops were supposed to be ready to move, something strange happened. Only a very little percentage of the flaming fists woke up from their sleep, along with those that were on guard duty that night. The rest would not wake up even with magical help. A part of Beregost was also hit by this, and the same is happening on the Amn side.

The rumors of a Plague start to spread. Was it the many dead rotting corpses, that still lies on the battlefield or fell in the river that brought this plague? Only time will tell.
Go home and be a familly cat!
Top

A massive attack is launched against Baldur's Gate's east gate, with a force of undead marching south from the Fields of the Dead -- and dragons of all kind battling both in the air and on the ground.

With the Flaming Fist presence so light, many adventurers come to the aid of the city, fighting a valiant and bloody fight that leaves many killed.

The Order of the Radiant Heart and the Flaming Fists available may well have been overwhelmed without the aid of the adventurers, and that aid will not soon be forgotten.

In the end, the attack proved to be a diversion, however, as a brilliant mote of light shot up from the Baldur's Gate palace district ...
Top

The Cult of Tiamat, with the aid of the Cult of the Dragon, manage to locate the fifth essence in the Hall of Wonders. Killing the priests and guardians, they bring together all five of Tiamat's essences and conduct the ritual of rebirth.

A brilliant mote of light shoots up through the Hall of Wonders, and a divine explosion rocks the whole district. People are evaporated in the streets and a raging fire erupts as the god is reborn.

All within a half-mile radius are deafened and momentarily blinded by the brilliance of the rebirth, but when their eyes clear the silhouette of a five-headed dragon can be seen above the city of Baldur's Gate.

The figure flies off to the East, scattering both chromatic and metallic dragons in all directions.

It is too late. 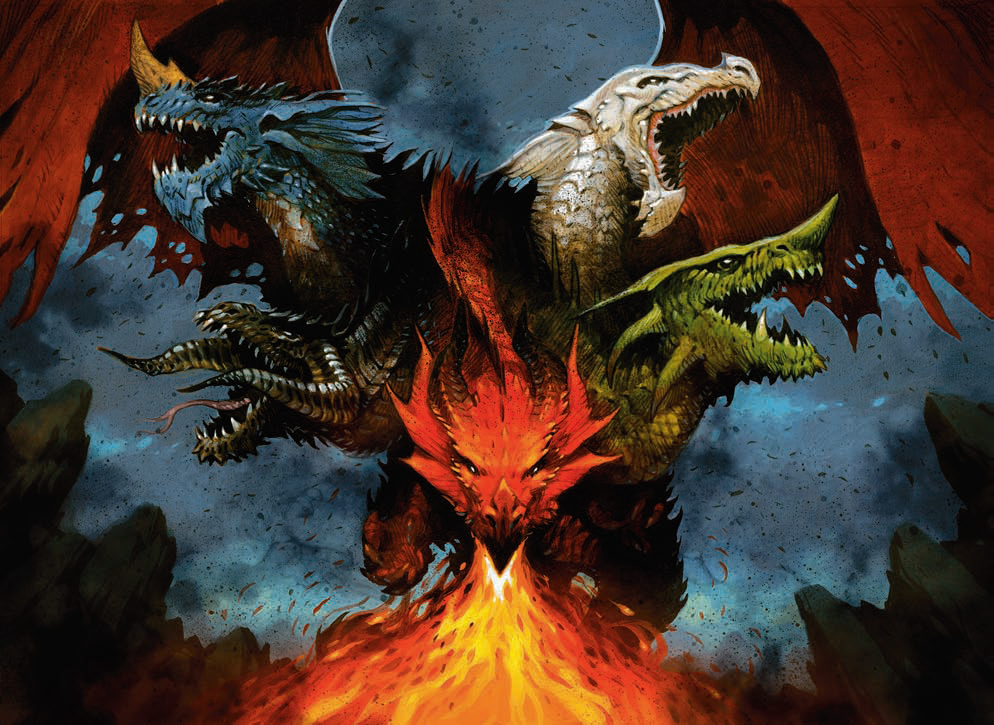