Background
Born the youngest son of a minor noble in Neverwinter, Osric lived a sheltered life of moderate luxury. Despite not being recognized as significant, House Vale did well for itself under the guidance of Osric’s father, Rodric; the family wanted for little, besides the recognition and elevation that Rodric craved. Those ambitions would go unfulfilled; in 1352, Rodric Vale would perish in a freak accident. The succession conflict that followed would eventually lead to Osric binding himself to a fey pact-mistress known to him only as the Lady of Dusk. Soon after, he was forced to abandon his House and went into exile.

After leaving Neverwinter, Osric wandered southward along the sword coast with his friend, Caslian Cavaliere. The pair arrived in Waterdeep together before circumstances took them in different directions. With Caslian preoccupied with his own affairs, Osric chanced upon a Daggerspell Mage and trained under him for a time. Ultimately, he would part ways with this new mentor as well; before continuing on southward alone, Osric promised Caslian they would meet in Baldur's Gate.

After his arrival at the Gate, Osric was content to keep to himself and the company of a few close friends. Lost, he entertained vague ideas about one day returning to Neverwinter and reuniting with his family. He held few illusions that he would ever be restored to nobility, however.

Appearance
Osric is a relatively young man of average height and build. His skin is fair and his hair dark, much like the rest of his siblings save for the strawberry-blonde Orelia. His hair is generally an unkempt mess, though he takes care to both shave and trim often. Most would consider him attractive.

When shaken, his hands feel smooth and soft; typical of nobility unused to hard labor, though it’s clear that recent trials have started forming the calluses that most adventurers have long since achieved.

Osric takes great care in his dress, preferring fine cloth and silk to the weight of armor. He maintains an air of distinct propriety. His posture is held straight and upright, and his arms and hands never lack for purpose. His movements are marked by a grace and agility that would be more commonly associated with elves; he is always sure of his footing and decisive in his step.

A silver band - an heirloom given to him by his sister - constantly circles his forehead.

Personality
Osric presents a cheerful and carefree persona to even his closest allies and companions, but the jovial mask hides a degree of uncertainty about his place, not only within Baldur’s Gate but in society as a whole.

Of late, Osric has found that he no longer prefers the sole company of his noble peers. Where once he might have dismissed the peasantry, he now finds many of his best friends coming from a myriad of social stations. Osric is loyal - sometimes to a fault. Whereas he is quick to judge those outside his circle of trust, he is loathe to believe anything negative about those he counts among his friends.

He feels and cares most deeply for those to whom he is close; he will express sympathy for others, but typically remain unmoved unless there is a larger injustice at play. As a devotee of Siamorphe, he is greatly concerned with the divine mandate of all nobility to rule their subjects fairly and well. He is particularly incensed by tales of corrupt nobles abusing their power over the common folk. Ironically, the individual plights of the poor and disenfranchised are not often on his mind unless he is affected by them directly.

If faced with confrontation, Osric is more likely to resort to diplomacy and oration to deliver his point. Like most nobles sheltered from the realities of life, he is loathe to employ violence unless he is (a) assured of its success; or (b) left without any other option. He prefers flight to conflict; this cowardice is only balanced by his need to maintain a semblance of dignity.

Recent events have given Osric a different perspective on alliances, contracts and holding to one’s promises. Now, he is more prone to allow emotion to dictate whether he stays true to any arrangement, rather than allow himself to be bound by mere words, whether they are traded in speech or signed into paper. That is not to say he is dishonorable - rather, it is to affirm that he will honor agreements only when they have been made without malicious intent by participating parties.

Religion
As most in Faerun do, Osric offers his prayers to a multitude of gods as the situation requires them: Chauntea for the harvest, Tymora for good fortune, and Selune during travel. Osric offers particular reverence to Tyr, as the patron deity of his home city of Neverwinter. Of all the gods, however, Siamorphe is the one to whom Osric feels the most closely connected. He stumbled across her faith after his exile from House Vale; his sojourn southwards led him to Waterdeep and to her church. Her teachings greatly appealed to him, especially after watching a brutal conflict tear apart his own family.

Not content to see the Divine Right's faith languish in Baldur's Gate, he has resolved to establish his house there in her name.

Ironically, the deities he most often invokes in colloquial speech are Tymora and Ilmater.

Physical & Mental Health
Osric suffers from no physical ailments beyond what a typical human would experience at his age. He does not boast extraordinary fortitude against disease or poison, but neither is he particularly susceptible to them.

As of 1355, Osric is optimistic and hopeful for the future. Having broken free from an insidious pactor and weathered a Sharran curse, he's developed a sense - possibly a mistaken one - that things generally turn out for the better. Despite the looming threat of the devil invasion, he is confident that ultimately the Gate, its residents, and its defenders will be victorious.

Languages
Osric boasts a moderate fluency in the elvish tongue, having spent much time with an elven tutor growing up in Neverwinter’s noble district. The formation of his warlock pact has also lent him a limited ability to understand and speak sylvan (see plot hooks for more information about his pact).

Hidden: show
Elements of this biography have been redacted to avoid spoilers.

Hidden: show
A collection of art I and others have done of Osric: 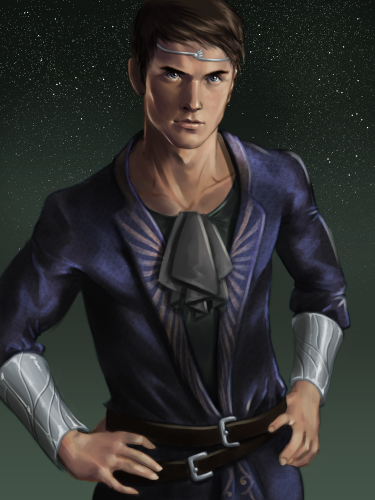 Osric in his current armor stylings: 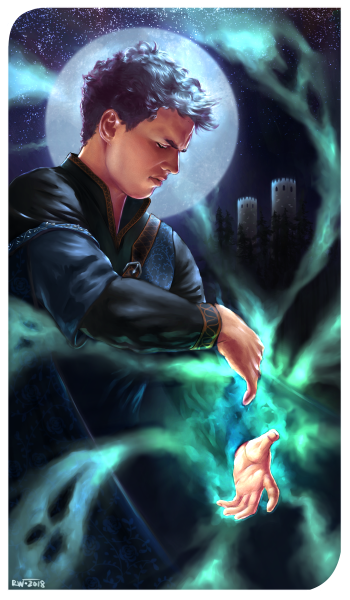 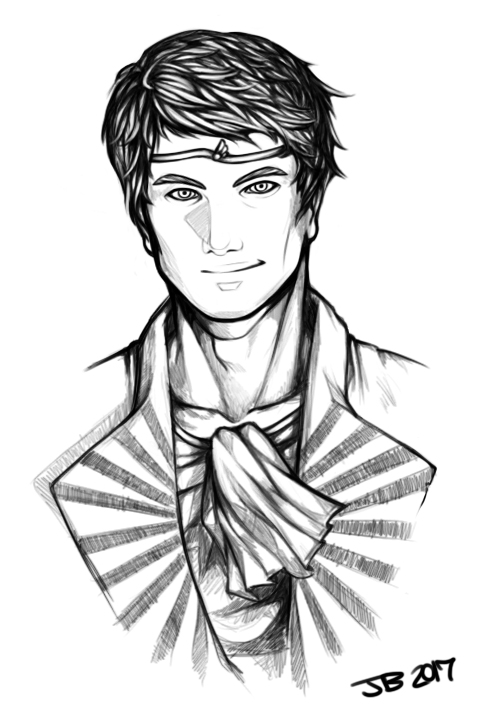 The below list of Osric's significant relationships is still in progress. The order of the categories is not intended to suggest any hierarchy. These are IC feelings that are not static and can change. Some characters may fall into more than one category; in that case, they are grouped in the section that I feel more strongly represents Osric's sentiments toward that character.

Unless they were specifically commissioned, all portraits are drawn based on my own personal take of the wonderful characters Osric has been fortunate enough to interact with. They may not reflect the true appearances of those characters as intended by their players.

Table coding was generously provided by the incomparable Nyssis.

... plz don't stop playing your characters after I add them here.