Thanks for the kind words everybody. It means a lot! As for printing, I'll definitely look into it once I get closer to finishing all these arcana. And I had no idea a deck of many things even existed =[. Will have to look into that as well! But I have to say, what I love about the tarot cards is the symbolism that comes attached.

Anyway, here's the latest card: Suul, as the Wheel of Fortune! 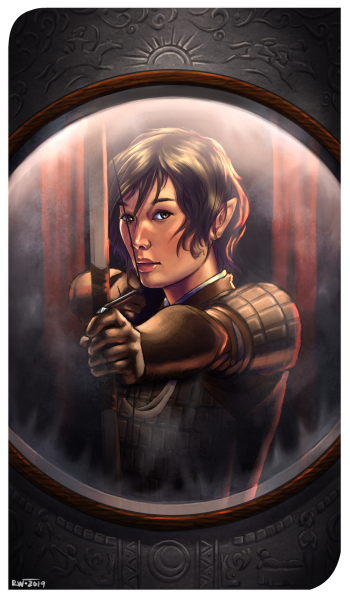 This was a challenging card for me (who am I kidding, they were all challenging D=), in no small part because it features a character played by an artist that that was my original OG art mentor: Nyssis! Without her encouragement and guidance, I would not be where I am today in terms of my art. And, it was in fact her utterly stunning tarot cards (there's a couple in this thread, and one here) that actually inspired me to attempt them myself.

It took some time and consideration to decide on what arcana I thought Suul would best embody. After discussing with Nyssis about the latest developments in Suul's life, I thought the Wheel of Fortune major arcana would be suitable.

Simplistically, the Wheel of Fortune represents karma, life cycles, and a turning point in one's life, among other things. I thought these were particularly appropriate for Suul based on the character growth and development she's experienced in her recent time on BG. Suul was once a bandit who stole and killed out of necessity, but also felt no remorse for her actions. In her time on BG, however, she's gained new perspectives that now cause her to feel guilt for her prior crimes. This seemed like a big turning point for her that I thought I would try to capture.

In my card, I have the actual Wheel part of the Wheel of Fortune represented by a circular mirror. Around the mirror are stone carvings that depict various events from Suul's past. Inside, we see Suul aiming an arrow at her reflection - a symbol of the guilt she now feels for past misdeeds. It also embodies the karmic meaning of the card - where once she aimed her arrows at innocent merchants and travelers, now she's aiming at herself.

Random notes:
- Out of all the cards I've done so far, this probably is the one that differs from the original Rider-Waite tarot card the most.
- The original card features lots of different creatures, including an angel, an eagle, a bull, and a lion. I continue my trend of excluding these elements for uh ... stylistic reasons (or possibly laziness

).
- Kudos to you if you can name the events in Suul's past depicted by the stone carvings.
Last edited by wangxiuming on Sun Mar 24, 2019 5:11 pm, edited 1 time in total.
House Vale Guild Page | House Vale Rumors & Roleplay | Osric's Biography | Story | Doodles & Things
Top

Amazing. Truly talented. The card has depth. Aiming at herself in the mirror is perfection.
Tholgur Steelsworn- "Ye want me'ta put a few bolts in 'im?"
Merissa Alanadel ~ Oblivious elf
Teeka Skreel ~ Bashful Brimstone
Solomon, Luckbringer of Tymora ~ A copper to the Lady, returns tenfold in gold!!
Elvish vowels = A E I O U and every single time Y.
Top

Thank you so much from the bottom of my heart, wangxiuming. Words can't begin to describe how much your work is my guiding force to become a better artist and attempt new techniques, and I feed off the creative energy in your pieces. You're a huge inspiration!

I love this so much. Is amazing and exactly how I pictured her. Great choice of card too.
Nathan Goldenmane - Knife Fighter of Sune

People like you are why I gave up on being a professional artist.

Thank you all so much! Your kind words really provide a lot of encouragement and creativity fuel.

@Nyssis, it's super gratifying to know that someone who has been such a source of inspiration to me is being invigorated by my stuff in turn. <3 <3!

@Arn, I know how you feel! But keep in mind, just a few years ago, i was drawing atrocities like the below and thinking they were the ish. 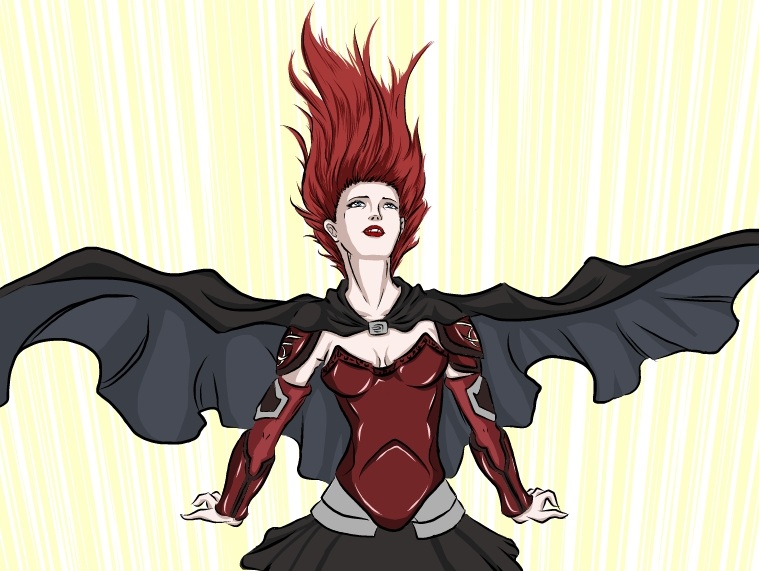 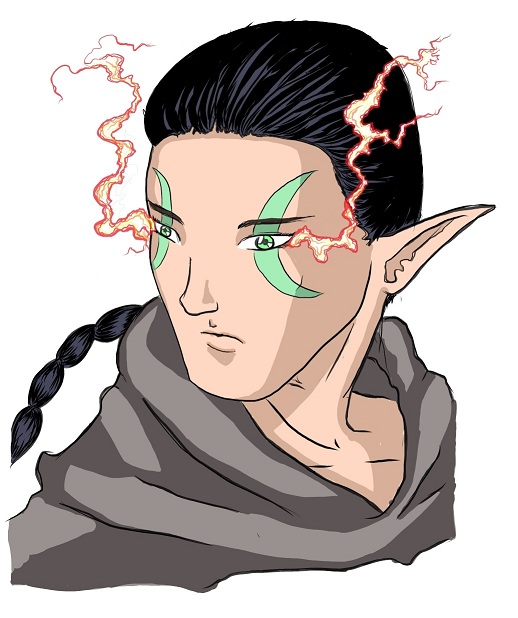 One thing I've definitely learned is that if you stick with something, you'll get better at it!
House Vale Guild Page | House Vale Rumors & Roleplay | Osric's Biography | Story | Doodles & Things
Top

This is so incredibly good!! Never stop artsing! Your work is so freaking fantastic. <3
A M A R A N T H E
❈ The streamlet’s gentle side it seeks, the silent fount, the shaded grot;
And sweetly to the heart it speaks: forget-me-not, forget-me-not.
Top

I still linger only for this subforum

Off exploring the Electric Universe.
Top

New card: Amaranthe, as the Empress 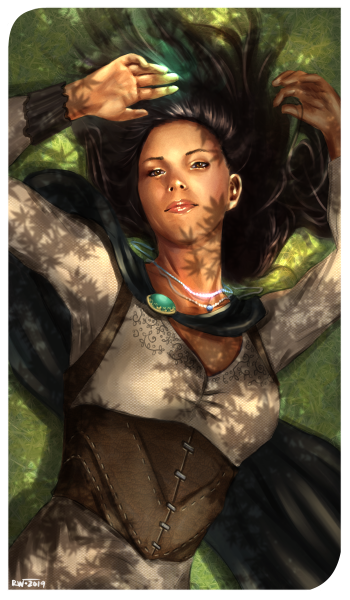 The Empress represents femininity, beauty, nurture, and nature (among other things) in its upright position. To me, there's no better representation of these qualities than Amaranthe!

In the original Rider-Waite card, the Empress rests on luxurious cushions in a field of wheat, backed by a flowing river and a verdant forest. In my version, I decided to have Amaranthe resting luxuriously on a field of grass - as a true embodiment of nature, the flora around her is luxury enough

! The flow of her cloak on the ground recalls the river and the cast shadow from the canopy above recalls the forest.

While many of the cards I've done have been appropriate for a specific time or event in the portrayed character's history (e.g., Wren and the Tower, Mae & Death, Osric & the Hermit), this card is one that I feel is representative of the character's being.

Random Notes
- Quickest turnaround on a tarot card yet! I was fortunate to find a reference whose pose I felt could carry the composition.
- Also the first card I've done from start to finish on my new Wacom Cintiq 16! I love it! (Side note, Suul was done mostly on the Cintiq 16, but I started the lineart on my old tablet).
- I used Angevere's amazing portrait of Amaranthe as a reference for her outfit.
- The accessories she wears are taken from OutsideVoice's beautiful biography.
- I think this might be the first card I've done that heavily features green in the color scheme. Ironically, even the World Arcana I did does not have that much green in it.
House Vale Guild Page | House Vale Rumors & Roleplay | Osric's Biography | Story | Doodles & Things
Top

I'm beyond honored for Ama to be included in your work, wangxiuming. This was far from expected and a thoroughly wonderful surprise to me!! THANK YOU SO MUCH for this beautiful depiction of muh druidess. I'm positively giddy over it, friend. It's such a perfect fit for her!

A M A R A N T H E
❈ The streamlet’s gentle side it seeks, the silent fount, the shaded grot;
And sweetly to the heart it speaks: forget-me-not, forget-me-not.
Top

Whenever I see new posts in here I get so excited. The tiny time between clicking and loading is like unwrapping a present. This is awesome.
Nathan Goldenmane - Knife Fighter of Sune

I am running out of ways to express how impressed I am with your art, so pls stahp.

I mean, look at that HAND. Pls stahp.

That one fell together really quick- and came out so gorgeous!
Savina Rook- Active
Wren Di'Corvi- Retired
"A bit ex-Zhentric" -Winterborne
Top

My contribution to the Men of BGTSCC Calendar? O=) Doodled this while being stuck on a tarot card. I realized I hadn't done any art of Osric this year yet, so here's my annual obligatory Osric, who's daydreaming or something.